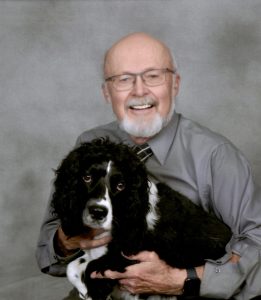 Paul N. Svingen grew up on a dairy & grain farm north of Benson, MN. The second of five children of Doris and Thov Svingen, he graduated from Benson High School, St. Olaf College in 1969, received M. Div. at Luther Seminary, St. Paul in 1975, and the D. Min. at the same institution in 1990. For the most part his entire ministry has been in the specialized ministry of intentional interim pastoral ministry. Having served 37 ELCA congregations across ten states over 47 years, he is an established authority on the specialized service of the care and calling of pastors following a congregation’s completed commitment to the developmental work of intentional interim ministry. For 20 years (1980-2000) he served in key leadership and development roles with the ecumenical Interim Ministry Network in Baltimore, MD. For 32 years he led the annual Intentional Interim Ministry training Program at Luther Seminary for pastors preparing to serve the church in that leadership role.

Pr. Paul served as organizing pastor of Bethlehem Lutheran Church in Mosinee, WI, in 1980. From 1984 to 1989 he served as Chaplain in the Chemical Dependency unit of St. Joseph’s Hospital in St. Paul as he concurrently served in interim ministry. A significant component of his doctoral studies at Luther was a two year assignment in service to residents at Oak Park Heights/Minnesota Correctional Facility in Oak Park Heights. He served as interim associate to the ELCA Bishop in the Pacifica Synod of the ELCA in Yorba Linda, CA, in 1998-99 concurrent with his interim pastoral ministry at Newport Harbor Lutheran Church in Newport Beach, CA..

Having lived in Minneapolis until 2008, Paul and his wife Susan live along the south shore of Island Lake in Ponto Lake Township near Hackensack, MN. Their daughter Kristy and her husband Lee live on the same lake and son Randy and his wife Melissa live near Elkhart Lake, WI. They have three daughters, Peyton in graduate school in Portland, OR, Brenna in college in Madison, WI, and Kenzi, a senior at Kiel High School.

Lastly, Paul and Susan live with their three English Springers; Rosie, Lizzie and Micah. Over the years, in partnership with ESRA (English Springer Rescue America) they have rescued and fostered and placed for adoption more than 20 English Springers. Micah is the 4 year-old who frequently travels with his “Dad” and loves being an “interim” church dog. 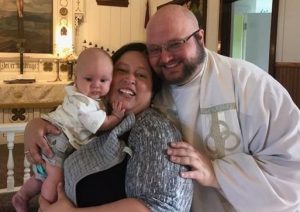 Pastor Jeremiah grew up in Duluth, spending time along the shores of Lake Superior with his parents and younger brother. He attended Luther College in Decorah, IA, earning a degree in music education and spending his summers working for Voyageurs Lutheran Ministry in northern Minnesota. After college, he lived in Rochester, MN for three years while working as support staff for children with developmental disabilities and behavioral disorders. In 2007 he moved out to Berkeley, CA to attend Pacific Lutheran Theological Seminary, completing his internship at United Lutheran Church in Eugene, OR and graduating in 2012. After graduation, he accepted a call to serve as Pastor at Shepherd of the Pines parish in Solway and Shevlin where he served until 2019. He lives in Bemidji with his wife, Katherine and their son, Bjorn. 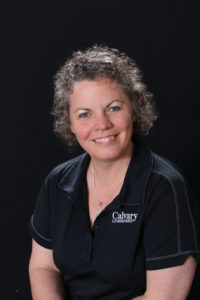 Shar has lived in Bemidji since 1990. She has a grown daughter who lives with her husband in Moorhead, MN. Shar married her best friend, Don Carlson, the summer of 2013. They enjoy working on their cabin, walking, listening to music and reading. Shar holds a BA in Business from UND in Grand Forks, ND. Shar worked for Schoolcraft Learning Community for 14 years, and concurrently worked part-time at Calvary planning and leading contemporary worship starting in January 2012. Shar began the full-time position as Worship and Music Minister in August of 2014. It is her prayer that she continues to learn and grow into this position, and that she can bless God and Calvary through her work here. 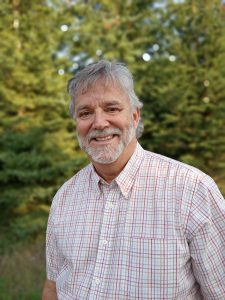 Brett grew up in Thief River Falls with regular trips to the cabin on Lavinia Road since birth (maybe before). Wendy and Brett moved into that cabin for a year in 2015 while building a home in Bagley, but surprise, in March of 2022, after six years in the new house, they moved back to Bemidji—downsizing and simplifying to make it easier to visit their four daughters and two grandchildren in four states.

Brett started a career in radio four days after high school and found his way back to that station 28 years later before accepting his most recent job as Volunteer Coordinator/Producer for KAXE/KBXE, Northern Community Radio. In between Brett worked at several radio stations, at a few newspapers, as a youth pastor in three different churches, and as an editor at Augsburg Fortress Publishers in Minneapolis (check the front of your Spark Bible—his name is in there!). He’s looking forward to collaborating with all the members of Calvary to work on the question, will our next generation have faith? 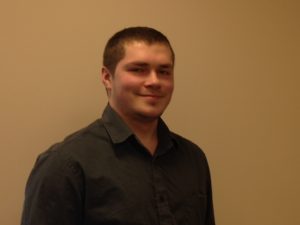 Garrett moved from Little Falls to Bagley at the age of ten with his four siblings and parents, Curt and Kitty Fultz. He graduated from Bagley High School in 2012 and decided to pursue a college degree at Bemidji State University. After over a year attending psychology courses, Garrett switched his focus toward business. In 2016 he graduated from BSU with a degree in Business Administration with emphases in Marketing and Management. Prior to being employed at Calvary Lutheran Church, Garrett was a Manager at Arby’s while working as a Merchandiser for Nabisco in Bemidji. 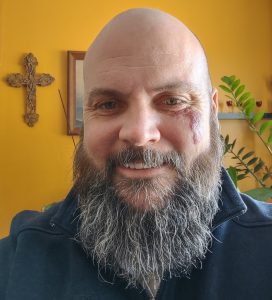 Hello Calvary Family.  My name is Tony Kerr. I have been a member of Calvary for 20 years or more and some of you may recognize me from my work on the Praise Team.  I have been involved in education for 20 years from teaching to administration, in levels from preschool through college.  I hold a Bachelors of Science in Music and K-12 Education, a Masters of Arts in Education Leadership, a Specialist Degree in School Administration and another Specialist Degree in Organizational Leadership.  I started my education leadership position in Red Lake as the Principal at St. Mary’s Mission school.  From there I moved around the area leading schools through certain challenges and tasks before realizing I was chasing around for bigger positions and all the time losing focus on what was really important, serving God. The position for the Calvary Preschool Director came to my attention, and with prayer, discussions with my family and a few calls to some friends, I decided to apply for this position, and by grace, was selected to serve.   My draw to the position was that we are a Christ focused family, and that IS the priority, above all!  I am excited to serve the Calvary community, to help and support our children, families and staff, and to serve God in a new way.  My family and I live in Bemidji, have been students and families of Calvary’s Preschool programs, we have been married here, baptized here, and continue to serve in new and exciting capacities as our family grows here.  This opportunity is a gift as I am now able to serve in a more intensive capacity.  My office door will always be open, I will listen, serve, and lead as Calvary sees fit, all the while, keeping the focus of the programs on God. 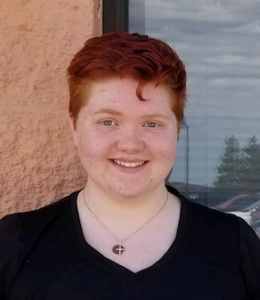 Rayne grew up in Fargo ND, moved to Bemidji in 4th grade, and quickly expressed interest in being involved in a church. Rayne’s ministry background began and continues to grow quickly. He got confirmed at Calvary in September of 2020 and began attending CLUB in 2021. He started finding additional things to do around Calvary, like taking a Teacher’s Aide position at the preschool. In July of 2021, Rayne was given a new opportunity. He was asked to volunteer as an AV tech for worship services. (He was very unsure of this, as he didn’t see himself as a techie in any aspect!) But he took the dive and began volunteering. Before he knew it, he was offering to be there every Sunday and every Wednesday to serve his church. In January of 2022, Rayne was offered the Multimedia Minister position and very quickly added music and media ministry to his (extremely long) list of passions. In December of 2022, he was offered the Administrative Assistant position. He is extremely grateful for the opportunity to work at Calvary, and everyone on staff has quickly become his family. Rayne is passionate about church history, culture, and human rights. This passion turned into a dream and is now a reality. Rayne will begin his college education by majoring in Communications and minoring in Sociology as a Post-Secondary Education Student and is interested in continuing his education by going to seminary after he finishes his undergraduate degree. He will study at Bemidji State University full-time beginning in August of 2022. Long-term, he dreams to be a Diversity, Equity, and Inclusion (DEI) specialist. His dream is to do this in a church setting to evaluate the inclusivity of churches around the globe and help them to better serve their communities and God. You can usually find Rayne at Calvary, but when he’s not there he spends his time being a leader, serving others, shopping, and drinking iced coffee. (Rayne will never turn down an iced coffee. Like, ever.) Rayne’s pronouns are he/him (what are pronouns?), and he is always happy and eager to answer questions about himself and his identity journey. 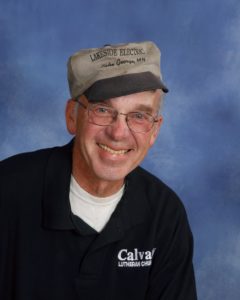 Gene Bright is the evening and weekend custodian at Calvary Lutheran Church. He was born in St. Cloud, MN and graduated from Stillwater High School in St. Cloud. Gene is a veteran of the United States Army and served in Vietnam. In his spare time, Gene enjoys reading, watching a little television and working in the garden. 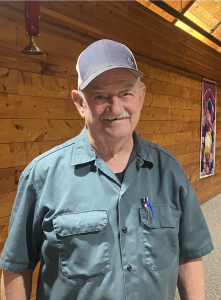 Gary Port was born in Bemidji in 1940. He was raised in South Minneapolis and baptized at Calvary Lutheran Church in South Minneapolis. Gary was found by Jesus in the 8th grade thanks to a Boy Scout leader. Gary married the love of his life, Betty in 1960 (boy was I lucky!) and they returned to Bemidji in 1965. They had 5 beautiful children, 4 boys and 1 girl (got lucky again!) Gary worked as a residential contractor for 40 years. At this point in my life, I’m mostly waiting for Jesus to return…hoping to get lucky again 🙂

Gary is glad to be at Calvary every day, helping to maintain the congregation and facility needs. Calvary is glad he’s here!