Let us give our thanks and praise to God! May our worship lift up and praise the name of Jesus and may our entire lives be a blessing to others. We continue to connect virtually, trusting God’s presence is in all places, with all people. Please let us know your prayer requests, life happenings, feedback on worship and programs, and stories of where you see God working in this time.

The Passion of Christ is the story of Jesus Christ’s arrest, trial and suffering. It presumably ends with his execution by crucifixion. Yet, the Passion is a chapter in a longer story and cannot be properly understood without the story of the Resurrection. The significant events of the Passion include Jesus’ entry into Jerusalem (Matthew 21:1-17), the Last Supper (Matthew 26:17-30), the Mount of Olives arrest (Matthew 26:18-56), the trial (Matthew 26:57-27:31) Jesus’ crucifixion, death and burial (Matthew 27:32-66) and the Resurrection (Mark 16:1-8).

As we gather to worship, here are two songs to help us focus on worship.

Opening Litany: pick one family member to read the Leader line (L), everyone else responds with the Congregation (C) line.

L: For those whose lives are broken by distress:

L: For those whose lives are broken by fear:

C: May the Lord bless you in your brokenness

L: For those whose lives are broken by anger:

L: For those whose lives are broken by pain:

L: For those whose lives are broken by illness:

L: For those whose lives are broken by sin:

L: God of life, you know us and love us all through all our circumstances.  Please help us to realize we are all broken, so that you can make us new.  In Jesus’ name we pray.  All: Amen.

Downloadable Resource, Daily Scripture readings and Offering: It’s because of your offerings that the church can continue its ministries.  Thank you! 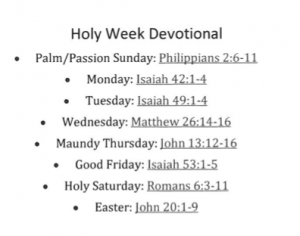 Your continued financial support for Calvary is vital during these challenging times as we seek to be a presence and blessing in Christ for the sake of the world.

24 So when Pilate saw that he could do nothing, but rather that a riot was beginning, he took some water and washed his hands before the crowd, saying, “I am innocent of this man’s blood; see to it yourselves.” 25 Then the people as a whole answered, “His blood be on us and on our children!” 26 So he released Barabbas for them; and after flogging Jesus, he handed him over to be crucified.

27 Then the soldiers of the governor took Jesus into the governor’s headquarters, and they gathered the whole cohort around him. 28 They stripped him and put a scarlet robe on him, 29 and after twisting some thorns into a crown, they put it on his head. They put a reed in his right hand and knelt before him and mocked him, saying, “Hail, King of the Jews!” 30 They spat on him, and took the reed and struck him on the head. 31 After mocking him, they stripped him of the robe and put his own clothes on him. Then they led him away to crucify him.

32 As they went out, they came upon a man from Cyrene named Simon; they compelled this man to carry his cross. 33 And when they came to a place called Golgotha (which means Place of a Skull), 34 they offered him wine to drink, mixed with gall; but when he tasted it, he would not drink it. 35 And when they had crucified him, they divided his clothes among themselves by casting lots; 36 then they sat down there and kept watch over him. 37 Over his head they put the charge against him, which read, “This is Jesus, the King of the Jews.”

38 Then two bandits were crucified with him, one on his right and one on his left. 39 Those who passed by derided him, shaking their heads 40 and saying, “You who would destroy the temple and build it in three days, save yourself! If you are the Son of God, come down from the cross.” 41 In the same way the chief priests also, along with the scribes and elders, were mocking him, saying, 42 “He saved others; he cannot save himself. He is the King of Israel; let him come down from the cross now, and we will believe in him. 43 He trusts in God; let God deliver him now, if he wants to; for he said, ‘I am God’s Son.’” 44 The bandits who were crucified with him also taunted him in the same way.

45 From noon on, darkness came over the whole land until three in the afternoon. 46 And about three o’clock Jesus cried with a loud voice, “Eli, Eli, lema sabachthani?” that is, “My God, my God, why have you forsaken me?” 47 When some of the bystanders heard it, they said, “This man is calling for Elijah.” 48 At once one of them ran and got a sponge, filled it with sour wine, put it on a stick, and gave it to him to drink. 49 But the others said, “Wait, let us see whether Elijah will come to save him.” 50 Then Jesus cried again with a loud voice and breathed his last. 51 At that moment the curtain of the temple was torn in two, from top to bottom. The earth shook, and the rocks were split. 52 The tombs also were opened, and many bodies of the saints who had fallen asleep were raised. 53 After his resurrection they came out of the tombs and entered the holy city and appeared to many. 54 Now when the centurion and those with him, who were keeping watch over Jesus, saw the earthquake and what took place, they were terrified and said, “Truly this man was God’s Son!”

55 Many women were also there, looking on from a distance; they had followed Jesus from Galilee and had provided for him. 56 Among them were Mary Magdalene, and Mary the mother of James and Joseph, and the mother of the sons of Zebedee.

Passion Experiences (choose a video based upon your family)

Prayers of the People

Lord’s Prayer: Our Father, who art in heaven, hallowed be thy name, thy kingdom come, thy will be done, on earth as it is in heaven. Give us this day our daily bread; and forgive us our trespasses, as we forgive those who trespass against us; and lead us not into temptation, but deliver us from evil. For thine is the kingdom, and the power, and the glory, forever and ever. Amen.

Benediction:Make the sign of the cross on the forehead of a family member and say, “You are broken, and a beautiful child of God”.

Service Challenge: Grab a garbage bag and some gloves. Go for a walk as a family and pick up trash alongside the road. Post pictures on our Facebook page 🙂

Questions for conversation:We encourage you to have some dialogue in your family utilizing these questions. If you would like to include a Lent Confirmation Mentor or another Calvary friend in your conversation, you could always call over the phone and talk!

Your continued financial support for Calvary is vital during these challenging times as we seek to be a presence and blessing in Christ for the sake of the world. 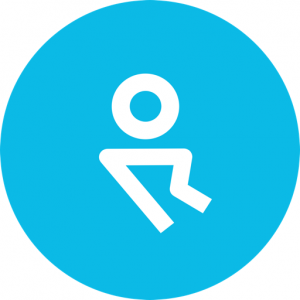